In the wake of President Donald Trump’s executive order last Thursday to protect religious liberties, a test case of those freedoms has entered the federal court system. A lawsuit was filed today in a US District Court in Phoenix, Arizona by the civil liberties group Alliance Defending Freedom (ADF) on behalf of a scientist with Answers in Genesis (AiG). The suit alleges that the civil liberties of geologist Dr. Andrew Snelling were violated when he was twice denied a permit by Grand Canyon National Park (GCNP) to continue his research due to his religious and scientific views.
The lawsuit names the U.S. Department of the Interior, the Grand Canyon park superintendent, and other government officials as defendants. ADF lawyers have carefully laid out ample documentation of a clear case of viewpoint discrimination against Dr. Snelling (Ph.D., geology), who had requested permission from the GCNP Research Office staff to conduct additional Canyon research. After the GCNP refused to issue Dr. Snelling a research and sampling permit to collect about 40 small samples from inside the massive Canyon in Northern Arizona, the park’s superintendent repeatedly ignored ADF’s letters of demand, and to date has not responded to an inquiry from U.S. Congressman Trent Franks (Arizona) last March about the matter.
The complaint arguesthat because of his “Christian faith and scientific viewpoints informed by his Christian faith,” Dr. Snelling’s application for a research permit was unconstitutionally rejected by the GCNP. The lawsuit highlights Dr. Snelling’s impressive academic background, which includes writing many articles in peer-reviewed mainstream geology journals, earning a doctorate in geology from the University of Sydney (ranked in the top 100 universities throughout the world), and conducting “substantial field and laboratory experience relating to numerous aspects of theoretical and practical geological research.” The lawsuit also points out that in 25 years of Canyon study, “Dr. Snelling has successfully completed 3 prior research projects without complaint from any NPS (National Park System) official within the Grand Canyon.”
During a three-year period that buried Dr. Snelling in needless red tape, the Park twice declined Dr. Snelling’s straightforward permit. Tellingly, the Park offered no scientific grounds for its last refusal. Instead Park officials imposed onerous conditions, making it virtually impossible for Dr. Snelling to comply. According to Park documentation obtained, no other scientist has faced such stipulations to receive research permits at the Canyon in the last three years. Dr. Snelling has supplied his attorneys with compelling documentation to support that claim. 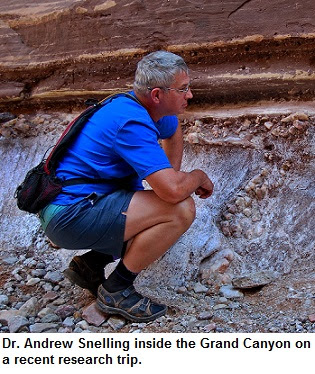 Apparently, Dr. Snelling’s most recent research project on behalf of a high-profile group (AiG) was deemed a threat to the prevailing viewpoint of the Canyon’s formation and timing. The language used by Park officials and its reviewers to describe Dr. Snelling’s proposal decry that a Christian and creationist seeks to do the research. Dr. Snelling’s proposed study could yield results that will undermine an idea that is heavily promoted inside the Park: namely, that the Canyon’s strata were formed over millions of years. With his intended research, Dr. Snelling seeks to gather samples at folds inside the Canyon where all the layers were bent, but were not shattered because the rocks were still soft as they folded—supposedly remaining soft over a period of 450 million years.
Dr. Snelling commented: “This case is all about giving the freedom for a scientist to do good science without having to undergo a religious litmus test. The samples I have been blocked from collecting in the GCNP are to be subjected to routine lab processing and investigations any good scientist would perform. The results are to be openly reported for all scientists to draw their own conclusions, whether or not they agree with my worldview interpretation of the history of the Earth.”
Regarding the Park’s censorship, Dr. Snelling added: “We expect debate about what the evidence means, but the Park shouldn’t prevent us from collecting data just like other scientists. I am merely asking for equal treatment by the government.”
ADF attorneys argue that scientists should not be forced to change their beliefs to agree with the government to make a living. Government officials such as those at the Park Service can’t require people to give up their beliefs as a requirement for getting a permit, and there should be no religious test for a credentialed scientist seeking to engage in further research in the Canyon.
Grand Canyon officials have displayed a prior animosity toward researchers who do not toe the line on the Park’s view of the Canyon’s history. Several years ago they attempted to ban a book from its gift stores that offered an alternative view of the Canyon’s formation.
With his executive order on May 4, President Trump announced that a priority of his administration is to re-instate many lost religious liberties.His order declared it will “be the policy of the executive branch to vigorously enforce Federal law’s robust protections for religious freedom.” The primary defendant in the Snelling lawsuit is the Department of the Interior, which manages America’s national parks. The DOI falls under the purview of President Trump’s executive branch of government.
Ken Ham, president of AiG (which employs several staff with earned doctorates, including Dr. Snelling), argues that his colleague is “just asking for equal access to the Canyon and not be stonewalled. The case is about good science being practiced by a good scientist who is being blocked by intolerant government bureaucrats. They have shown a clear animosity toward a researcher’s faith and want to trample on his civil rights.”
Ham added: “Ongoing infringements of religious liberty by the government, secular activists, and others have been a sad sign of the times. We are seeing that now with Dr. Snelling’s civil rights being violated. I wonder if the same scientists and activists like Bill Nye who joined the so-called March for Science in Washington last month will support a highly qualified scientist like Dr. Snelling and file amicus briefs on his behalf.”