I actually visited the museum and walked the halls. I saw the displays. There wasn’t anything sacrilegious in my opinion. I have taught CCD for over 29 years and I assure you that if I saw anything there offensive I would have rung a bell. . The exhibit is about the inspiration of heaven. It addresses how laity display their faith in clothes and artwork.

The Costume Institute’s spring 2018 exhibition—at The Met Fifth Avenue and The Met Cloisters—features a dialogue between fashion and medieval art from The Met collection to examine fashion’s ongoing engagement with the devotional practices and traditions of Catholicism.

Serving as the cornerstone of the exhibition, papal robes and accessories from the Sistine Chapel sacristy, many of which have never been seen outside The Vatican, are on view in the Anna Wintour Costume Center. Fashions from the early twentieth century to the present are shown in the Byzantine and medieval galleries, part of the Robert Lehman Wing, and at The Met Cloisters.

The event that launched the display that is housed there has always been over the top. People are encouraged to interpret what the them is. Yes, seeing Rhianna dressed as a Pope was in poor taste, but she wasn’t doing it to be evil. She was doing it as fashion moment. The other outfits were worn by people who have either zero understanding of Catholicism or have just interpreted what their stylist said is smart.  By the way, these events are for the stylists. When it comes to the actual gala I would remind folks of this scene from one of my favorite films, ‘The Devil Wears Prada’

With the movie The Devil Wears Prada scene below.

They didn’t have objects displayed disrespectfully. They treated then with the dignity they deserved. Crosses were secured and signs explaining the actual artistic rendering were low and clear enough that if you should want to meditate upon the piece you could.

The main floor contained items that were excavated from sites in years ranging  from 300 to about 1300. There were bits and pieces of broken stain glass and bits of abandoned wood. There were processional crosses that were broken and buried and restored as best could be.  The three complete crosses that were in the main area were appropriated affixed above folks heads with the actual art detail. The artwork was all respectfully detailing the saints and symbolism represented in the paintings and  the carpets hung on the wall.  There were saints that had long been abandoned and forgotten. You could see that they had been found in excavation sites. Where possible  the museum detailed as much as it could.

The Vatican items on loan are in an area that is secluded from the main floor of the museum. You must go downstairs to an exclusive area. They are the popes mitres and vestments that were worn by .  The vestments were laid out on a plain table for you to see. You can look t the artwork and the stitchwort sown in. There are a few elaborate cloak closures and a handful of pectoral crosses. The biggest display is the actually cassock, shoes and personal items of St John Paul the II. It is correctly labeled. It is behind a glass window.

Courtesy of the Collection of the Office of Liturgical Celebrations of the Supreme Pontiff, Papal Sacristy, Vatican City. Digital composite scan by Katerina Jebb

Here is another example of pure beauty that was on loan. 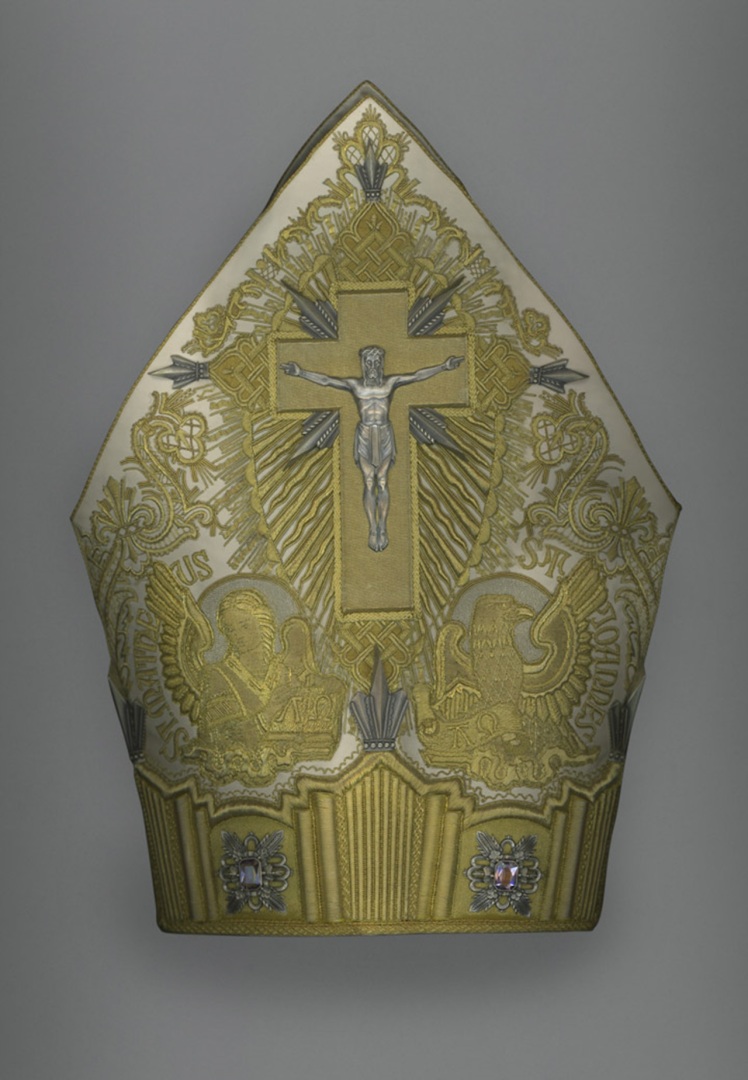 Mitre of Pius XI (r. 1922–39), 1929. Italian. Courtesy of the Collection of the Office of Liturgical Celebrations of the Supreme Pontiff, Papal Sacristy, Vatican City. Digital composite scan by Katerina Jebb

And finally here are St. John Paul II’s shoes. The display actually had his cassock as well.

The Chasuble from World Youth Day 1997 were on display. 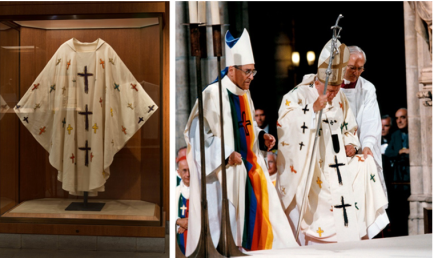 There were costumes and clothing pieces that talked about why and how designers got inspiration. For example, one designer designed a piece for a film  it had 33 buttons that are similar to the 33 button on a cassock that represent  the 33 years of Christ’s life.

The “ecclesiastical fashion show” in Federico Fellini’s film Roma (1972) provided inspiration for Domenico Dolce and Stefano Gabbana’s autumn/ winter 1997–98 collection, which presented various adaptations of the soutane as a “take on masculine/feminine.” This duality, expressed in the tailoring and accessories, also drew upon another filmic reference: The Priest’s Wife (1971) directed by Dino Risi. In one scene, the movie’s protagonists, Don Mario Carlesi (Marcello Mastroianni) and Valeria Billi (Sophia Loren), are dressed in a black soutane and a long, double-breasted black coat dress, respectively—a deliberate confusing (and confounding) of both gender distinctions and the boundaries between the clergy and the laity.

The style and color of this dress by Jeanne Lanvin were inspired by the exquisitely dressed and beautifully choreographed angels in the paintings of the Dominican friar posthumously called Fra Angelico (known as “the angelic painter”). Its decorative embellishments of foliate arabesques embroidered with silver and gold paillettes find a visual parallel in the painted gold ornamentation on the blue garment of the angel in Fra Angelico’s Saint Dominic and His Companions Fed by Angels (ca. 1430–32). This dress was featured in the New York World’s Fair of 1939, displayed on a custom mannequin in the form of an angel, which has been recreated here by the sculptor Malcolm Hill.

There is a window that shows the various crucifixes  that have been designed over the years by various designers.

As a CCD teacher,  I went in being observant of what this meant to my faith. It was actually a teaching moment. As a Catholic woman I wanted to see with my own eyes, had my favorite museum betrayed me.

There wasn’t nothing there that I would have considered evil or disrespectful.

I am more concerned that we cannot look at something and see the beauty and be able to bring that beauty to those who would never see anything like this. It was an afternoon well spent.

After all we are charged with bringing beauty to the world, not hiding it.