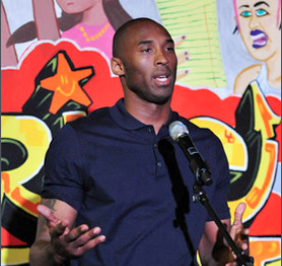 Sports fans all over the nation were shocked Sunday afternoon when news spread  that Kobe Bryant had passed away as result of tragic helicopter crash.  I can’t help but wonder did he have a miraculous medal on and was he praying when the realization of tragedy dawned.

He was daily Mass attended and Divine Mercy prayer.

You see, from all accounts Kobe was a faithful Roman Catholic who relied on his faith. Bryant was a husband and a father who in 2015 attributed his Catholic faith with helping him move past a challenging period in his own life and the life of his family.

Bryant was raised in a Catholic family, and spent much of his childhood living in Italy. He married in 2001 in a Southern California parish.

Fear of being sent to prison for a crime he believed he had not committed, Bryant told GQ that “The one thing that really helped me during that process—I’m Catholic, I grew up Catholic, my kids are Catholic—was talking to a priest.”

“It was actually kind of funny: He looks at me and says, ’Did you do it?’ And I say, ’Of course not.’ Then he asks, ’Do you have a good lawyer?’ And I’m like, ’Uh, yeah, he’s phenomenal.’ So then he just said, ’Let it go. Move on. God’s not going to give you anything you can’t handle, and it’s in his hands now. This is something you can’t control. So let it go.’ And that was the turning point,” Bryant said.

Singer Cristina Ballestero posted on Instagram Jan. 26 a story of her encounter with Bryant at Holy Family Cathedral in Orange, California at a weekday Mass.

“As we went up to communion, [Bryant] waited for me to go. If you grew up in the Catholic Church, you understand this is a respectful thing men do in church as a sign of respect to women. He said I have a beautiful voice. His most inspiring trait was his decision to turn to his faith in God and receive God’s mercy and to be a better man after a regretful decision,” Ballestero added.

Bryant also had connected his Catholic faith to a family commitment to help the poor, through the Kobe & Vanessa Bryant Family Foundation. The foundation helped fund youth homeless shelters and other projects aimed at serving the poor.

Bryant, the father of four, was 41 when he died this afternoon with his daughter Giana, 13 at his side.

I pray for the repose of his soul and lift his family in prayer.