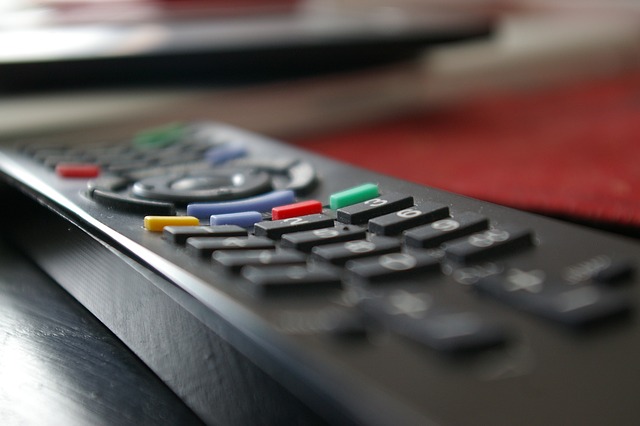 ABC programmed its entire Thursday primetime lineup with ShondaLand dramas  Grey’s Anatomy Scandal  and  How To Get Away With Murder, then branded the night as “Thank God It’s Thursday” (or “TGIT”). This echoes ABC’s former TGIF branding of its Friday night family sitcoms and even NBC’s Must See TVpromotion of formidable Thursday night television hits in the 1990s.

Thursday is an especially important night for American television networks because it’s the last chance for advertisers of weekend purchases like movies and cars to reach a large TV audience, and networks schedule highly rated programming for the night to attract those advertising dollars. The Associated Press called Rhimes’ reign of an entire night of network television “unmatched in TV history.

Shonda has a narrative that makes you tune in.

It may be time for Shonda to start farming what I believe are the best book series out  there.These books I will stand behind as picking the best in print. Yes, I said it. If you haven’t read them. You need to read them!

Jasmine Cox Larson Bush. The name is a mouthful but the books are an adventure in what happens when a woman wants to survive is the brainchild of  Victoria Christopher Murray.

This is book 1 in the series that introduces you to a woman who wants to do more than succeed, she wants to win.

Book 2 A Sin and A Shame-After her scheme to break up her best friend’s marriage fails, Jasmine is ready to begin her new life. She attends church every Sunday, swears off married men, and begins her mission to find her soulmate. It doesn’t take long to meet the one God has chosen for her – a pastor

Book 3 Too Little Too Late-She took marriage vows to be honest and true, but Jasmine’s still hiding secrets to keep her husband, Minister Hosea Bush, by her side. When Hosea’s ex-fiancée, Natasia, suddenly appears in New York, Jasmine knows it’s not a coincidence. A former man stealer herself, Jasmine is very aware of Natasia’s motives — even if Hosea is not.

Book 4 Lady Jasmine-With her own lies, she nearly destroyed her marriage to Pastor Hosea Bush. Why, Jasmine was forced to reveal every secret she’d ever kept from her husband, right down to her real age, weight, and shoe size! She thought she had told Hosea everything.

But when Jasmine is blackmailed with a terrible truth from her past that she “forgot” to tell Hosea, more than just her marriage is in jeopardy.

Book 5 Sins of the Mother Jasmine Larson Bush is finally living a drama-free life. She’s left her lying, cheating, stealing stripper days behind and is standing by her husband’s side as the first lady of one of the largest churches in New York City. The Bushes have been blessed with the best of everything—including two lovely children.

But just when Jasmine has committed her life completely to God, her daughter Jacqueline is kidnapped from a mall the day after Thanksgiving.

Book 6  Sinners & Saints -Victoria Christopher Murray and ReShonda Tate Billingsley bring their favorite heroines together in a novel that will delight their legions of fans. Jasmine Larson Bush and Rachel Jackson Adams are not your typical first ladies. But they’ve overcome their scandalous and drama-filled pasts to stand firmly by their husbands’ sides.

When a coveted position opens up—president of the American Baptist Coalition— both women think their husbands are perfect for the job. And winning the position may require both women to get down and dirty and revert to their old tricks. Just when Jasmine and Rachel think they’re going to have to fight to the finish, the current first lady of the coalition steps in . . . a woman bigger, badder, and more devious than either of them.

Book 7 Scandalous– Before she was a minister’s wife, she was Jasmine Cox, the most prized dancer at Foxtails. Newly engaged to her high school sweetheart, Kenny Larson, Jasmine knows it’s time to leave her secret life behind and settle down. But on the night of her bachelorette party, she meets Roman and their lust-at-first-sight tells Jasmine this man is nothing but bad news. Built like a god yet sinful as dark chocolate, Roman ignites a passion in Jasmine that has long since fizzled out between her and Kenny. When a mindblowing one night stand with Roman turns into another…then another…Jasmine must face the fact that she’s full on addicted to a man who isn’t her husband–and this secret can only lead to trouble. A prequel to the Jasmine series, written with Victoria Christopher Murray’s trademark twists and electrifying voice, SCANDALOUS is a thrilling peek into Jasmine’s world before she becomes the woman we all love to hate.

Book 8 Fame &; Fortune– Jasmine Cox Larson Bush and Rachel Jackson Adams have been through a lot together from fighting for their husbands to become the head of the American Baptist Coalition to getting mixed up in a terrible murder. Now the frenemies have found themselves the stars of First Ladies, a muchanticipated new reality television show.

Jasmine balks at the idea of airing her dirty laundry on national TV, but Rachel sees it as the perfect opportunity to take her brand to the next level. And if Rachel is in, so is Jasmine. All the cast members are women of God—how much drama can there be?

Rachel and Jasmine know their own pasts are murky, but they’ll seem like choir girls when the secrets and sins of the others come to light. The two will once again have to form an unholy alliance to go up against these so-called Godly women who see the show as their chance to take them down—at any cost.

Closely connected to these books are the stories of Rachel Jackson and her pastor husband. You see them again  when authors Reshonda Tate Billingsley and Victoria Christopher Murray teamed up to allow their successful characters Jasmine Cox Larson Bush and Rachel Jackson Adams to live in books together.

You meet Rachel in the below series:

Book 1- Let The Church Say Amen–  Reverend Simon Jackson has always felt destined to lead and he’s done a good job of it, transforming his small Houston church into one of the most respected and renowned in the region. But while the good Reverend’s been busy tending his flock, his family’s gone astray. His 19-year-old daughter, Rachel, gives new meaning to “baby mama drama.” Crazy in love with her son’s father, she’s wreaking havoc on the man’s life, even though he’s about to marry another. David, Simon’s oldest at 27, has been spiraling downward ever since a knee injury ended a promising football career. These days he’s seeking solace in drugs—even feeding his habit by stealing church offerings. Blessedly, 23-year-old Jonathan, a college graduate and the apple of Simon’s eye, is poised to take his father’s side as associate pastor—or so everyone thinks.There  is a movie coming soon.</span>

Book 2   Let The Church Say Amen Again The First Lady of Zion Hill Church has a problem: Her “bed-jumpin’ husband” got someone else pregnant and the other woman, a well-practiced scam artist, won’t take her hooks out of The Reverend.

Up next is the epitome of heat! Meet the books that will melt your hands away! 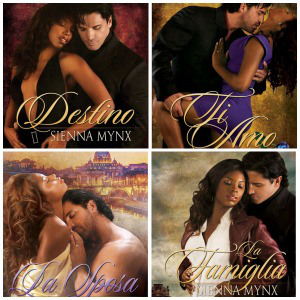 I stumbled upon The Battaglia Mafia Series purely by accident one day. Amazon suggested I read it.  Well, it was 100% right this time. The book series deserves a chance to be seen on screen! I would tune in. It is simply delicious. It has violence, intrigue, mystery and charm. Take a look at the book descriptions below and tell me that they are not more delicious than a desert with Gladiators.

Book 1 ‘Destino’– Mira Ellison is poised to have it all. In 1989, she is the first prominent African American fashion designer redefining change for both beauty and style among the renowned in Italy. That happens until the evening she meets a tall, mysteriously charming Sicilian businessman who orchestrates a friendship Who is he really? What harm could a little fling in one of the most beautiful countries in the world bring?  What will happen next will stun you.

Book 2 ‘Ti Amo’– Don Giovanni Battaglia will have his revenge. A bloody Mafia war has ravaged the southern region of Italy. Every man, woman, and child born under the name Calderone must be made to atone. That is the law. After two years of blood and bullets, the men sworn to follow without question find themselves wanting peace. But how can there be peace when the one person able to save their Don from the destructive path he is on is beyond their reach. Or is she?

Book 3 ‘La Sposa’ -The year is 1991. Two years after discovering love and losing it Mira Ellison has finally accepted her destiny. She will become Donna Mirabella Battaglia, the wife of one of the most notorious crime bosses in Southern Italy. And she plans to have it all, her man, her children, and the fashion dynasty she left behind. But with privilege comes ties to bloodlines that will threaten to destroy her love and family from the inside.

Book 4 ‘La Famiglia’– The year is 1992. The Battaglia family awaits the birth of the newest members to their clan. Twin boys will be born to the capo di tutti capi of the Neapolitan clans. By an African American woman who has married the most powerful and feared Mafia boss in all of southern Italy.
Before the birth Don Giovanni Battaglia makes a decision that shocks the family. He will move his wife out of the Campania to his homeland of Sicilia. Against the advisement of his consigliere and uncle, the family relocates to the beautiful seaside beach town of Mondello. And unbeknownst to the Don the lies and secrets he keeps from his wife are already unraveling as well as his empire. His cousin Lorenzo Battaglia who has suffered a humiliating banishment plots secretly to return. The men of the Camorra, organize against him to take control of a region they feel he has left open to his enemies. And the most powerful Don in Sicily, Marsuvio Mancini, is determined to expose his famiglia tie to Mirabella Battaglia. It is an old Mancini family secret that will bring forth cataclysmic consequences. 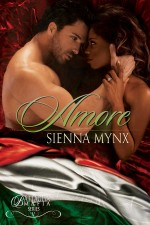 Book 5- Amore- This book was a stunner. In the spring of 1994 the fashion would awaits the return of the reclusive designer Mirabella Battaglia. Many have speculated for years about the torrid love affair between their fallen star and the world’s most notorious crime boss Don Giovanni Battaglia.

Mirabella is overjoyed. She has it all, a husband who loves her, a new sisterhood with her long lost twin, healthy children and a loving family that supports her. Now is the time to reclaim her passion for designing. Giovanni loves his wife, and though her reemergence into the fashion world would expose them to the risks of fame and celebrity he willingly makes the sacrifice. Nothing is more important than his Bella’s dreams.

However, a very dangerous enemy lurks in the shadows. He has watched Mirabella’s life blossom with seething hatred and envy. He wants the woman and life he thinks was stolen from him, and he is prepared to burn the Battaglia dynasty to the ground to have her again. Secrets, plots of revenge, and lies infiltrate the Battaglia family. The destruction and pain left behind is catastrophic and can only be healed by true love. But will Giovanni and Mirabella learn that lesson too late? 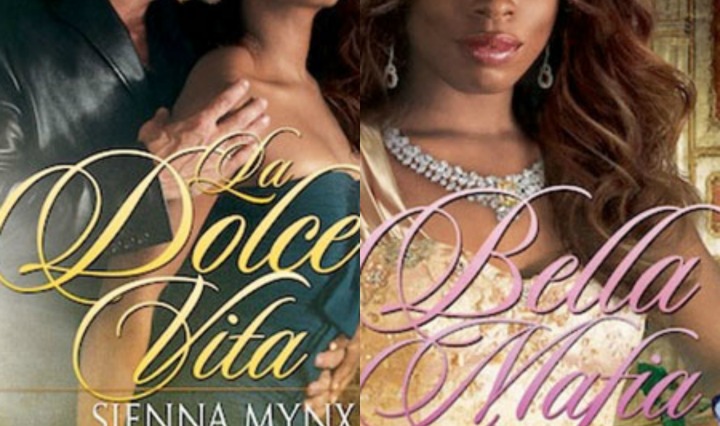 Promise if these books came to television you wouldn’t miss an episode.