Many of us have teens in our lives that are avid readers. Here are a few of the best Christian Books for that teen in your home. 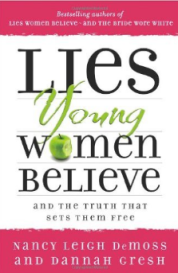 Lies Young Women Believe: And the Truth that Sets Them Free

In this book, Nancy and Dannah expose 25 of the lies most commonly believed by your generation. They share real-life accounts from some of the young women they interviewed, along with honest stories about how they’ve overcome lies they believed themselves. They get down in the trenches of the battle with you. Best of all, they’ll show you how to be set free by the Truth.

You have been lied to! Have you been deceived? Through a nationwide survey and in-depth discussion groups, Nancy and Dannah have listened carefully to the heart of your generation. And here are some things they’ve heard:

“I know God should be the only thing that satisfies, but if it could be Him and my friends, then I could be happy.”

“It seems like I have been struggling with depression forever. I always feel like I am not good enough.”

“I tell myself that I don’t really listen to the song lyrics, but once I hear a song a few times and start thinking about what they’re saying I realize that it’s too late.  It’s already stuck in my head.”

“For me, the whole wife and mom thing is overrated. It isn’t cool to want a husband and a family.”

Maybe you can identify. Trying to listen to the right voices can be difficult. This book has been written by friends who will help you find the Truth. Maybe your heart is telling you that some things in your life are way off course. Certain habits and relationships have left you confused and lonely. This is not the way it’s supposed to be.

Every Young Man’s Battle: Strategies for Victory in the Real World of Sexual Temptation (The Every Man Series)

Can any young man escape the lure of sexual temptation in today’s world?

You’re surrounded by sex constantly–in movies, on TV, video games, music, the Internet. Is it any wonder that it feels impossible to stay sexually pure?

How do men survive the relentless battle against the onslaught of lust?

The authors of the hard-hitting mega-bestseller Every Man’s Battle know the temptations young men face every day. The fact is, you can achieve victory over sexual compromise.
Every Young Man’s Battle shows you how to rise above today’s debased, self-seeking culture by examining God’s standard, training your eyes and mind, cleaning up your thought life, and developing a plan. With extensive updates for a new generation of men, this is the award-winning guide to practical resistance. Bottom line: these strategies are biblical and they have worked for millions of men.

Mystery, murder, and fame collide in the first book of the Rayne Tour series, featuring a teen on tour with her rock star mom. During a concert, sixteen-year-old Shaley O’Connor stumbles upon the body of a friend backstage. Is Tom Hutchens’ death connected to her? Frightening messages arrive. Paparazzi stalk Shaley. Her private nightmare is displayed for all to see. Where is God at a time like this? As the clock runs out, Shaley must find Tom’s killer-before he strikes again.

Abraham is exiling Ishmael, son of his Second Wife, now that elderly Sarah has finally had a son. Sam’s dad has left Sam’s mother for a younger white woman. In Book One, Ishmael’s poems express his pain, confusion, and love: Half Chaldean./Half Egyptian./Half slave./Half free./Half loved./Half hated./Half blessed./All me. His story is set against the background of nomadic desert life, always in the context of God’s relations with, and plans for, him. Book Two gives present-day Brooklynite Sam his say: black man breaks/black woman’s heart/to marry white witch. He’s angry at his father, baffled by his mother, and resistant to his stepmother’s friendly overtures. Luckily he has friends and faith; prayer and a kiss from a potential girlfriend provide some peace. The biggest obstacle turns out to be the biggest help: his dad’s new son worms his way into his half-brother’s heart. Books Three and Four continue the first-person accounts: Abraham’s second son is clearly his favorite, and Sarah (a witch here) withdraws her love from Ishmael. Anger and jealousy threaten Ishmael’s relations with his father and with God. Sam’s father leaves him disillusioned and betrayed. The cross-play is effective, though Sam’s story is more vivid and engaging. References to God (not Jesus) layer another father into the mix.