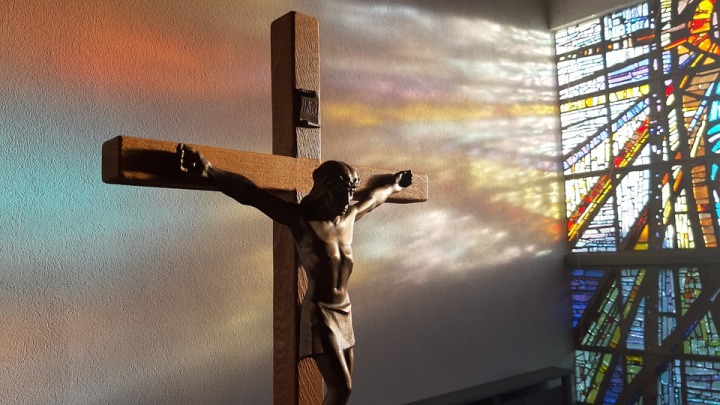 Who can bear to look upon the bloodied cross where Jesus hung without shame or sorrowful grief, disbelief or reverent awe? The cross brings us face to face with Jesus’ suffering. He was alone – all his disciples had deserted him except for his mother and three women along with John, the beloved disciple. And his death was agonizing and humiliating. Normally a crucified man could last for several days on a cross. Jesus’ had already been scourged, beaten with rods, and a crown of thorns pressed into his skull. It is no wonder that he died mid-afternoon. Pilate publicly heralded Jesus “The King of the Jews” as he died upon the cross, no doubt to irritate and annoy the chief priests and Pharisees (John 19:19).

We can find no greater proof of God’s love for us than the willing sacrifice of his Son on the cross. Jesus’ parting words, “It is finished!” express triumph rather than defeat. Jesus bowed his head and gave up his spirit knowing that the strife was now over and the battle was won. Even on the cross Jesus knew the joy of victory. What the Father sent him into the world to do has now been accomplished. Christ offered himself without blemish to God and he put away sin by the sacrifice of himself.

In the cross of Christ we see the triumph of Jesus over his enemies – sin, Satan, and death.

The Cross of Christ is the safeguard of our faith, the assurance of our hope, and the throne of love. It is also the sign of God’s mercy and the proof of forgiveness. By his cross Jesus Christ has pardoned us and set us free from the tyranny of sin. He paid the price for us when he made atonement for our sins. The way to peace, joy, and righteousness in the kingdom of God and the way to victory over sin and corruption, fear and defeat, despair and death is through the cross of Jesus Christ.

Do you follow the Lord Jesus in his way of the cross with joy, hope, and confidence?